The Hyak was the name given to a steamboat launched in 1892 at Golden by Captain Francis Patrick Armstrong for the Upper Columbia Navigation and Tramway Company. She was one of two steamboats then operated by the Company between Golden and Adela Lake (or Mud Lake – just before Fairmont), and became part of a transportation route that ran 300 miles from the Canadian Pacific Railway at Golden down to Jennings, Montana.1

The Hyak was an extremely narrow, shallow draught vessel built particularly for operation in the spring and autumn when the larger vessel of the Company, the Duchess (and later the North Star), was unable to run.2 Spring and autumn were periods of low water on the Columbia River, even more so in this era when extensive alterations to the river’s flow were still ongoing to keep the bulk of the river in one channel.3 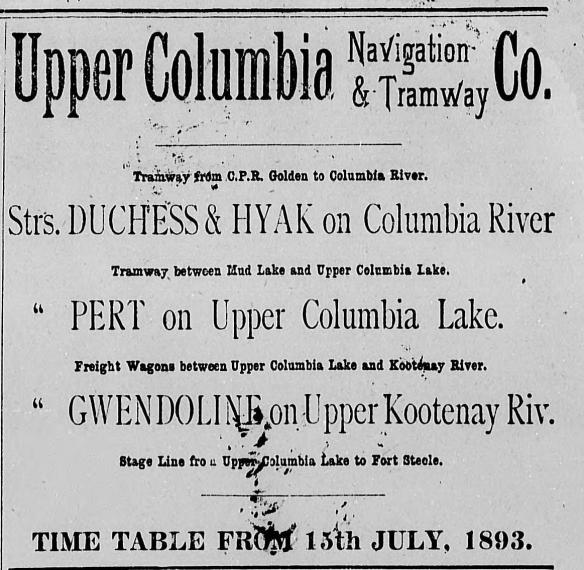 The small size of the Hyak – she measured only 11.2 feet (3.4 metres) across in the middle of the boat – meant that during some of her operations, the crew found themselves suspended out over the water as there was not enough room on her deck to move around.4

In 1903, the Hyak was sold as part of the assets of the Upper Columbia Navigation and Tramway Company, although she remained in use for the successive company (the Upper Columbia Transportation Company) for some period of time.5 The advantages of the Hyak were somewhat diminished after the introduction of the steamboat Ptarmigan in April 1903, as the Ptarmigan was both larger and able to run in even lower water than the Hyak.6

In 1905 it was reported that the Hyak was being refitted as a passenger boat to be used exclusively in providing fast service from Golden to Windermere for the tourist and passenger trade.7 After these reports of her refitting in 1905, the Hyak seems to disappear from the record. Her ultimate fate is not known.

The name Hyak comes from a word in the Chinook Jargon language meaning “fast” or “hurry up.” The Chinook Jargon, sometimes referred to as “the wawa”, was a pidgin trade language: a grammatically simplified language in which elements taken from different local languages were combined to allow for communication between people who don’t share a common language.

In the Pacific Northwest of the United States, elements of First Nations languages along the coast, near the Chinook tribe, were combined with other indigenous languages as well as elements of French, English, and Polynesian to form the simplified Chinook jargon. The language itself was relatively easy to learn, with only a couple hundred words in the lexicon and an extremely simplified sentence structure. As trade and movement of people spread, the language also moved from the Pacific Northwest into British Columbia and even up into Alaska.

For much of the nineteenth century, the Chinook Jargon was the primary form of communication throughout British Columbia. In the 1860s, for example, there were an estimated 100,000 speakers of “the wawa”. Even into the twentieth century it was common to find people who learned it as their first language, particularly in more remote areas of the province and in mills or canneries.

For people in the Windermere Valley, “the wawa” was at once a novelty and a means of communication. For those living in the area and interacting with a wide variety of people elsewhere in British Columbia, knowledge of the wawa could break down barriers of communication. It is almost certain, given Captain Armstrong’s past and his profession in navigation across the region, that knowledge of the wawa was an asset. Even those who never became completely fluent they likely picked up on the basics. It is interesting to flip through a Chinook Jargon dictionary and see what words from the Chinook Jargon words have made their way into B.C. English. Some examples that may be familiar include:

While doing research on the Hyak, I did my usual Google Search to see if anything interesting popped up. There’s a town in Washington State named Hyak, as well as a “Sno-Park“. Apparently Outdoor Research (an outdoor gear company) also recently put out a pair of pants (both men’s and women’s) named Hyak. I appreciate that Chinook is still being used in marketing today!