” The story of Windermere is either very short and idealized, or a bit longer and far more complicated. I’ll share both, and you can decide whether you want to stick with the (extremely brief) somewhat romantic story, or if you want to carry on into some less cheerful corners of valley history. Your choice.”

The Sunshine and Rainbow Story

The origins of the name Windermere are not well recorded (at least that I could find). It was apparently named in 1883 by Gilbert Malcolm Sproat, who went to the region with A.S. Farwell as a special agent of the Government.1 Sproat chose the name “Windermere” for a fancied resemblance to Lake Windermere in the Lake District in England.2 Not having visited the other Windermere myself, I can’t really judge, although I did find this postcard a few years back. 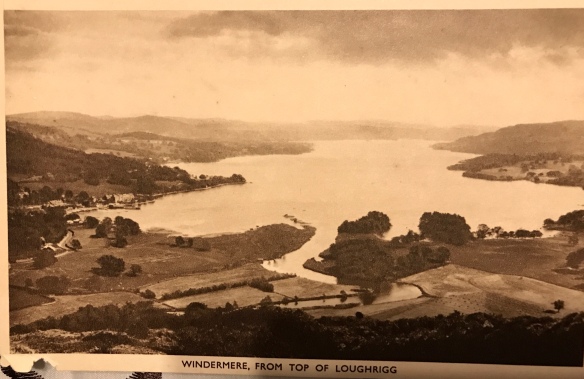 Windermere (the English one) was by the 1880s one of the most popular holiday and summer resorts in the country. The area was easily accessible after a rail line was built in 1847, and there were various steamer boats on the lake as well as nineteen islands to explore.

The origins of the name “Windermere” are somewhat murky. The ‘mere’ part is easy, as in Old English ‘mere’ means a ‘lake’ or a ‘pool’. The “Winder” part referred to someone, although it’s unclear who. It might have come from a personal name of Swedish origin (Vinandr), or a Germanic pronoun (Winand). Regardless, the lake was known as “Winander Mere” or “Winandermere” until at least the 19th century.

In the Canadian context, the name Windermere quickly became associated with the area and eventually became attached to the lake as well. The 1882/83 Directory for British Columbia lists Baptiste Morigeau as a farmer at Columbia Lakes.3 In the next Directory (1884/85) the original type once again lists the location as Lower Columbia Lake, however an inset added at an unknown later date suddenly places a number of farmers and ranchers at Windermere.4 For the next fifteen years or so, the community of Windermere was the main settlement in the valley (with a hotel and Government House), and Windermere came to refer to both that community and the wider region. The name “Lower Columbia Lake” continued to be used until around the turn of the century (1900) to refer to Windermere Lake.

So that’s the easy story: Windermere was so named for its beautiful scenery resembling the English countryside. 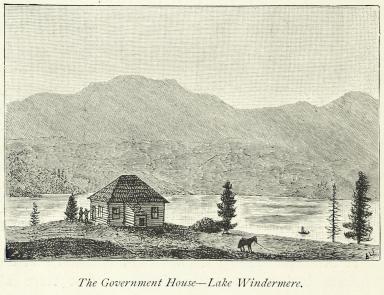 Astute readers may have noticed that I left out certain details in the above story. First, I did not mention that the lake was already named when Sproat arrived, and second (more notably), I did not explain why the Government sent a special agent to the valley in the first place.

In answer to the first question, the Ktunaxa, who had been living in the area for some time, called the lake “?akisqnuk” and the area of the community of Windermere, “Kananuk.”5 A second Aboriginal group, the Secwepemc (Shuswap) had been living in the area around the lake with permission of the Ktunaxa since the mid 1800s, and at least one source claims they had a name for the lake meaning, “Salmon Lake” (I was unable to find any more information about this).6 Meanwhile, in settler circles, David Thompson had called the lake Kootenae Lake, and maps up until about 1900 show it as Lower Columbia Lake or more generally as one of the Columbia Lakes.

In answer to the second question, why the Provincial Government decided to send representatives to the valley, A.S. Farwell was asked to investigate and report on the viability of a proposal by William Baillie-Grohman to built a waterway to drain floodwaters from the Kootenay River into the headwaters of the Columbia in order to reclaim land further downstream (This would later become the canal at Canal Flats). While in the area, Farwell was also instructed by the Chief Commissioner of Lands and Works to report on how the First Nations people of the area used the lands that would be reclaimed, as well as to report, “generally upon Indian requirements in the locality.”7

That second part of Farwell’s instructions for the 1883 expedition, to report on the First Nations people, is possibly the reason that Gilbert Malcolm Sproat was sent along (although one source suggests the two were also friends, which may have had some bearing).8 Sproat had never been to the Kootenay region before, but he had extensive experience in meeting with Aboriginal peoples as between 1876 and 1880 he was the Indian Reserves Commissioner appointed jointly by the Province of British Columbia and the Dominion Governments. As Sproat’s role in the naming of Windermere is crucial, I want to take a minute with him.

In Sproat’s role as Indian Reserves Commissioner (1876-1880), he was tasked with allocating Indigenous reserves in British Columbia. He met with various First Nations groups, listened to their concerns about settler land claims, and also met with white settlers before making decisions about where reserves might go.9 He did not have authority to take away land already claimed by settlers.

Sproat did a number of “circuits” in British Columbia, but lost the support of the government and the settlers in 1879 when he chose to support a set of rules and regulations put forward by the <a href=”https://en.wikipedia.org/wiki/Nlaka%27pamux&#8221; rel=”noopener”Nlaka’pamux people (on the Fraser, Thompson and Nicola rivers) for their self-governance.10 By moving beyond his role in making land-related decisions and into support for Aboriginal self-governance, Sproat fell out of political favour.

Which brings us back to Sproat and Farwell’s 1883 trip to the East Kootenays and Farwell’s instructions to report on the First Nations peoples of the area. The year 1883 was a turning point in the valley. Up until that time, only one settler family was living there: Baptiste Morigeau lived with his family alongside Morigeau Creek (later Windermere Creek).

In April of 1883 there was a sudden influx of white settlers. A party of Canadian Pacific Railway surveyors had wintered over in the area that is now Golden, and that spring E.J. Johnston claimed land beside Morigeau’s claim, followed by F.W. Aylmer a few miles below the lake (later A.W. Tegart’s ranch), and F.P. Armstrong and D. Bellhouse along Columbia Lake. The last two claims were particularly disrupting as they were in the middle of land used by the Ktunaxa to run cattle.13

It is completely understandable, then, that by the time Farwell and Sproat arrived the valley’s residents were unimpressed. They had been, “anxiously awaiting, year after year, the arrival of the “Commission,” and are particularly angry and disappointed at no action having been taken during the past season towards defining their reserves.”14

Recall that even in Sproat’s time, the Reserves Commission did not have the power to take land away from settlers who had claimed it: once the land was claimed, there was very little chance of getting it back. The Ktunaxa in the area had been waiting for years in frustration for their land rights to be acknowledged, and in the meantime strangers were putting up fences.

In response to Farwell’s report expressing the dissatisfaction of Aboriginal residents in the valley, in 1884 Sproat’s successor as Reserves Commissioner, Peter O’Reilly, was sent to the Windermere Valley. After negotiating with the Ktunaxa, O’Reilly made a series of recommendations for a reserve in the area, including allocating land in excess of what the Provincial Government believed was reasonable (the Government wanted to give no more than 20 acres to a family of five).

O’Reilly’s report was immediately criticized by William Smithe, the Chief Commissioner of Lands and Works for the Province, as being “excessive”.15 In a strongly worded letter to O’Reilly, Smithe stated that, “I cannot but think that in Kootenay you have over-estimated the requirements of the Indians and under-estimated those of the whites, who, if not there now, are more than likely in the near future to be found there, anxiously looking for land to settle upon.”16

In other words, O’Reilly’s negotiations with the Ktunaxa were pretty much ignored. The Province of British Columbia at the time did not want to give a family of five Indigenous people any more than 20 acres of land (when a single white settler might freely claim 320 acres), and the future desires for land from people coming into the valley had far greater importance than the immediate and future needs of those already living there.

As of 2019 there is still no formal treaty between the Ktunaxa/Shuswap First Nations of the Windermere Valley and the Federal Government (the Ktunaxa are currently in the middle of treaty negotiations).

I didn’t plan on diving headfirst into land rights and treaties in my first post. I figured this would be a light and breezy way to dip my toes in: after all, I’ve named this entire blog after Windermere, and it’s a charming British name based on the beautiful scenery. What harm done?

But I don’t think that it’s as simple as that. When Sproat looked over the beautiful scenery of the valley and the mountains and the lake, and was reminded of an idyllic English countryside, the country that he saw was very much a product of his own imagination. This was not the English countryside, but I think the name suggests his desire for it to become so.

Names have power, and by calling this place “Windermere”, Sproat was evoking a British ideal of what he wanted the place to be. Those expectations were already being made manifest with the sudden rush of land claims in 1883, and the refusal of the Provincial Government the following year to allow the Ktunaxa the land they had negotiated for with the Reserves Commissioner.

Sproat’s “Windermere” was not a place where residents were upset about land being taken away without their permission: this was an imagined Windermere with a single British society in which Indigenous people had been fully assimilated and “civilized”, following settler rules on fully settler land with no trace of Kananuk or ?akisqnuk remaining. That vision of “Windermere,” suggested in a name given in 1883, would become a guiding force in the future development of the valley.

Bartholomew, F.R.G.S. Map of British Columbia and Vancouver Island, British North America, Sheet III, Pacific Coast. London and Edinburgh, A Fullerton & Co, 1872. https://davidrumsey.georeferencer.com/maps/245504247643/view#
BC Geographical Names, North Windermere Creek, Accessed 12 December 2019. http://apps.gov.bc.ca/pub/bcgnws/names/17811.html
BC Geographical Names, Windermere, Accessed 12 December 2019. http://apps.gov.bc.ca/pub/bcgnws/names/25727.html
BC Geographical Names, Windermere Creek, Accessed 12 December 2019. http://apps.gov.bc.ca/pub/bcgnws/names/23094.html
BC Geographical Names, Windermere Lake, Accessed 12 December 2019. http://apps.gov.bc.ca/pub/bcgnws/names/23096.html
British Columbia Legislative Assembly. Report on the Kootenay Indians. By Mr. A.S. Farwell. Victoria: Government Printer, 1884.
https://dx.doi.org/10.14288/1.0060548
British Columbia Legislative Assembly. Return to an Order of the House for a return of all lands set apart for Indians in this Province subsequent to the return made to this House on 13th January, 1873, with the names of the tribes ad the number of Indians for whom each reserve has been made; and a return of the reserves which have been made to the Chief Commissioner of Lands and Works, but not assented to by him. Victoria: Government Printer, 1884. https://dx.doi.org/10.14288/1.0060971
Harris, Cole. Making Native Space: Colonialism, Resistance, and Reserves in British Columbia. UBC Press, 2002. https://books.google.co.nz/books?id=WnUBwOkmzI8C&lpg=PA219&pg=PA146#v=onepage&q=sproat&f=false
Pike, Sarah P. “Gilbert Malcolm Sproat, British Columbia Indian Reserve Commissioner (1876-1880), And the “Humanitarian Civilizing” of Indigenous Peoples.” Master’s Thesis. University of Toronto, 2018. https://dx.doi.org/10.14288/1.0364556
Rickard, T.A.”Gilbert Malcolm Sproat.” British Columbia Historical Quarterly. Vol 1 No 1 (January 1937): p 21-32. https://dx.doi.org/10.14288/1.0190699