Jack immediately set himself up with a “first-class pack train,”11 equipped with twenty-two horses to haul equipment in and out of the mines up Toby Creek.12

In typical fashion, we do not have much information about the Barbour family before they moved to the Windermere Valley. John Smith (Jack) Barbour was born on 19 August 1860, in Derby (near Owen Sound) Ontario.1 In 1899 he had been living near Kalispel, Montana, and in August of that year came into the Windermere Valley with a pack train from the West Kootenays.2 He clearly liked what he saw as he would return to settle within the year.

Jack’s wife, Marguerite Ann Kreutter was born 31 October 1866 in Des Moines, Iowa,3 and in early 1900 was working as a “vegetable cook,” in Decorah (also in Iowa).4 It is unknown how she and Jack met. In autumn 1899 Jack returned to Ontario to visit family and, on his return through Iowa, he and Marguerite were married in April 1900.5 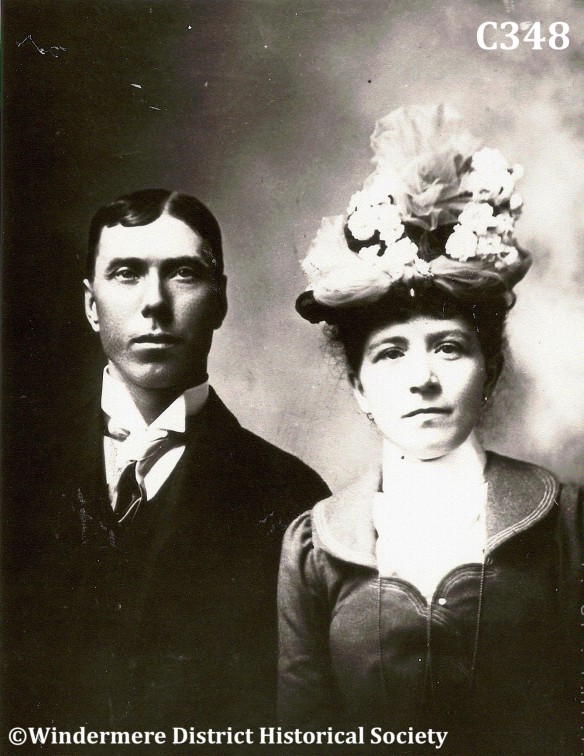 The newlyweds moved to the Windermere Valley immediately following their wedding,6 and in July 1900 Jack filed a pre-emption for a lot of land along Toby Creek.7 This lot is located just south-east of what is now Barbour Lake, and took over a previous pre-emption (no 331) made by Bill Nye.8 Marguerite’s younger brother, Henry Kreutter, also filed a pre-emption, in September 1900, for a parcel of land immediately west of John’s lot.9 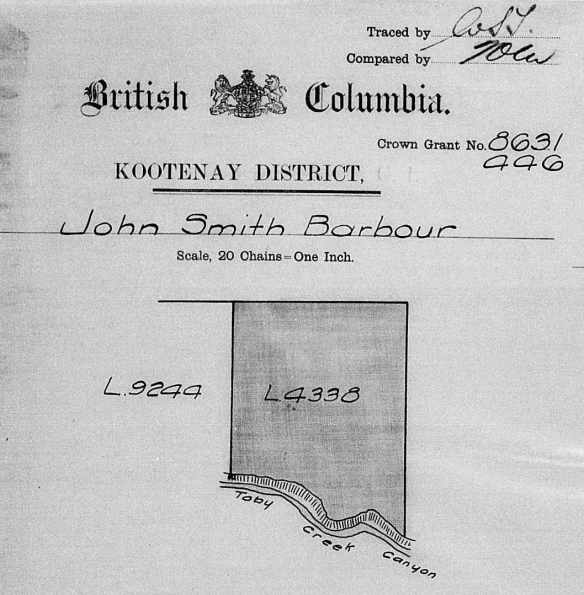 Jack was required in this land application to present a Certificate of Naturalization, which is to say he had to get British citizenship. This should not have been necessary, as he was born in Canada, so it could be that he had received American citizenship at some point (his naturalization application lists him as having lived in Minnesota).10 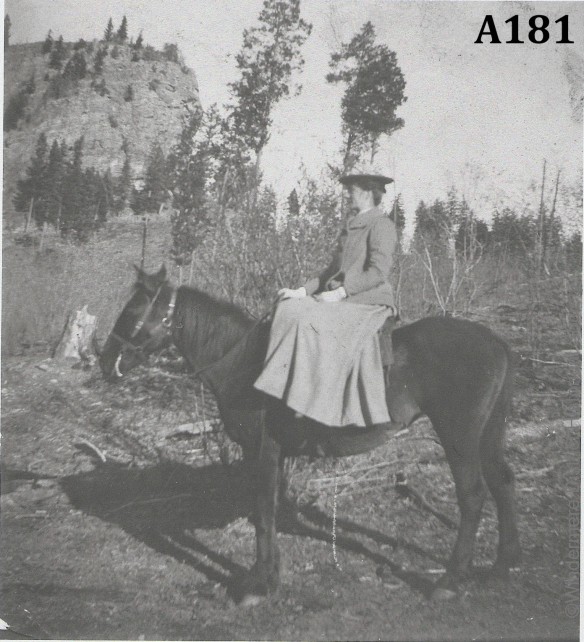 Marguerite Barbour riding on the Barbour Ranch. Windermere Valley Museum and Archives, A181.

Jack and Marguerite settled into their niche along Toby Creek. They had chosen the property for the location, as Jack immediately set himself up with a “first-class pack train,”11 equipped with twenty-two horses to haul equipment in and out of the mines up Toby Creek.12 A wave of mining activity had begun in the area in 1897, with the first trial shipment of ore from these new mines, from the Delphine, having been made in spring 1899.13 With dozens of mining claims up Toby Creek, and with ore to be hauled out and provisions to be brought in, it was a good business opportunity.

John Barbour drumming up business in July 1900. Eventually word-of-mouth would do much of this advertising for him. The Outcrop (Canterbury B.C.), 5 July 1900, p 2.

Marguerite was an integral part of this early venture, recalling having, “spent the first winter in a tent by Toby Creek while Jack was packing.”14 She also helped Jack with packing of the ore itself, and was frequently found in Jack Pine Camp near to the Paradise Mine.15

Barbour was awarded numerous contracts through the years, gaining a good reputation and, as years went on and mining activity decreased, he established himself as a guide and outfitter for hunting and mountaineering groups.16

Additions to the Family

In January 1903, Marguerite left to visit her home in Iowa for a couple of months,17 and while she was there, her sister unfortunately passed away. When Marguerite returned, in May 1903, she brought her sister’s son with her, Ted Egge.18 Ted lived happily with the Barbours until autumn 1905 when he learned that his father had died. Wanting to return to his brother in Iowa, in February 1906, at age 15, he ran away from home.

A note in the local newspaper upon his sudden departure informs the reader that, “Ted is a good boy and a favourite with every person who knows him, and anyone who may meet this orphan, yet home sick boy, and aid him will receive the hearty thanks of this community. It is generally believed he started south, towards Cranbrook.”19 It is unclear what happened to Ted, but the request to help Ted rather than return him suggests he probably made it back to Iowa.

Meanwhile, the Barbours had expanded their family with four sons born between 1904 and 1909: John Edward (Ed), James Albert (Bert), Henry Theodore (Harry), and George Gilbert Grey. The boys were reportedly named after King George and Queen Mary’s sons.20 Marguerite took a series photos of her young sons that have long been favourites of mine, some of which I happily share in this post. 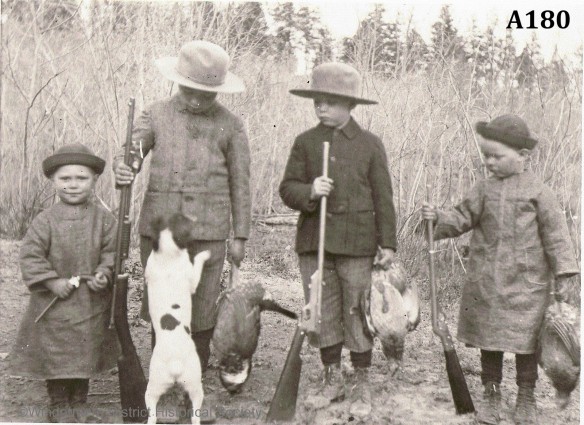 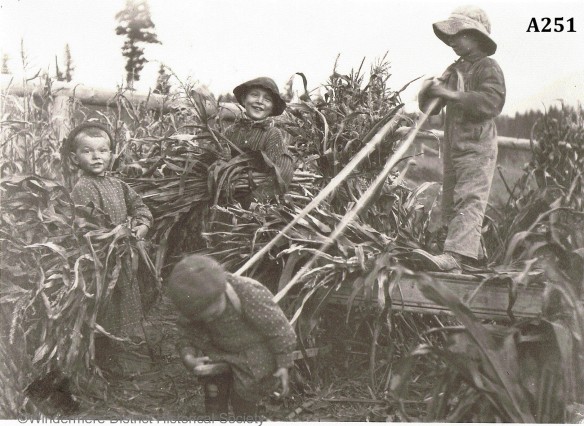 Harvest time at the Barbour Ranch. Windermere Valley Museum and Archives, A251.

As the Barbour boys got older, the family moved to Wilmer for them to be closer to schooling, and Jack is listed a trustee of the Wilmer School for the 1916-1917 year.21

The Barbour family settled into the community. In March 1907 Jack was appointed by the Provincial Secretary’s Office as a Commissioner to take affidavits for the supreme court,22 a position he held through at least 1909.23 He was also at one time Master of Freemason Columbia Lodge No 38,24 and on the executive of the Windermere District Liberal Association.25

In 1908, Jack had a chance encounter with then Governor General of Canada, Earl Grey, who was travelling over the mountains from Argenta. Grey’s party had taken refuge at a “comfortable camp” that happened to belong to Barbour, making themselves at home in absence of the owner. As Grey recounts,

“So far from resenting the occupation of his camp by strangers, he [John Barbour] appeared to be genuinely pleased. When I apologised to him for having made ourselves at home in his absence, and for having helped ourselves freely to his food, he replied with a broad smile that we were most welcome ; that such was the way of the country ; and that he would do the same by us when he struck our camp in our absence. … Mr. Barbour, after providing us with another excellent meal of Toby trout… drove us to his ranch, 12 miles down the road, where we were most hospitably entertained by Mrs. Barbour.”26

According to Barbour’s later account of the incident, he had been unaware that the interloper was the Governor General of Canada, and instead presumed the group to be a couple of mining experts he was expecting from Nelson.27 The camp referred to was likely in the vicinity of present day Barbour Creek (and likely the origins of the name).

Jack and Marguerite continued ranching activities, purchasing land up Frances Creek to make hay and winter horses.28 They each also purchased a lot bordering what is now Dunbar Lake, in 1909, likely as investment properties. By 1925 both properties were held by Dunbar Investment Co.29

Jack Barbour passed away in Invermere on 4 July 1939 at age 79.30 Marguerite followed on 20 January 1952.31 Both are buried at the Windermere Cemetery. 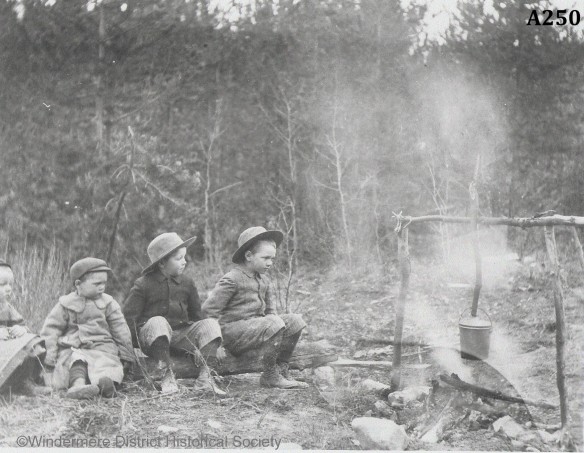 Watching the billy boil. Windermere Valley Museum and Archives, A250.

All four of the Barbour sons followed the example of their father to some degree.

The eldest, John Edward (Ed), born 31 March 1904,32 is listed in 1942 as a British Columbia Guide/Outfitter out of Wilmer.33 He was also manager at the Thunderbird Mine (located up Delphine Creek) in the mid 1940s,34 and was a partner owning a mineral claim up Hawk Creek (the Albion Group) in Kootenay National Park.35 According to local Wilmer knowledge, Ed lived in the old George and Delphine Starke home for a time.

Ed purchased the former De Crespigny Ranch near Radium (Lot 11107) in 1935, where he grew hay and raised horses until his death in 1991 (this is the “island” ranch in the wetlands visible from the highway driving south from Radium).36 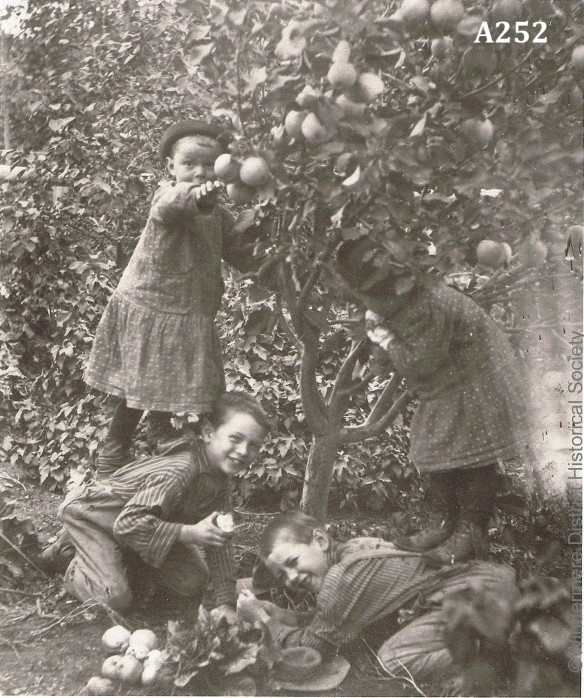 The elder Barbour brothers giving their younger brothers a boost. Windermere Valley Musuem and Archives, A252.

James Albert “Bert”, born 15 October 1905 in Wilmer,37 was a labourer in 1928 when he married Mabel Edna Laughlin.38 He remained in Wilmer working sometimes as an assistant guide,39 as well as a rancher.

In 1935 Ed and Bert together purchased the 240 acre former Munn Lake Ranch, located immediately west of Wilmer, on which they ran cattle as well as having horses, hay fields, and potatoes.40 Bert died suddenly on 10 December 1971 while rounding up cattle on his ranch.41

Henry Theodore, born 21 December 1907 at Wilmer,42 married in Invermere on 29 September 1931 to waitress Hazel Simpson of Cranbrook.43 The two later divorced, and in about 1940 Henry moved up north to work as a Forest Ranger out of Pouce Coupe (just southeast of Dawson City), where in 1965 he received a certificate for twenty-five years of continuous service.44 He passed away there on 11 May 1988.45 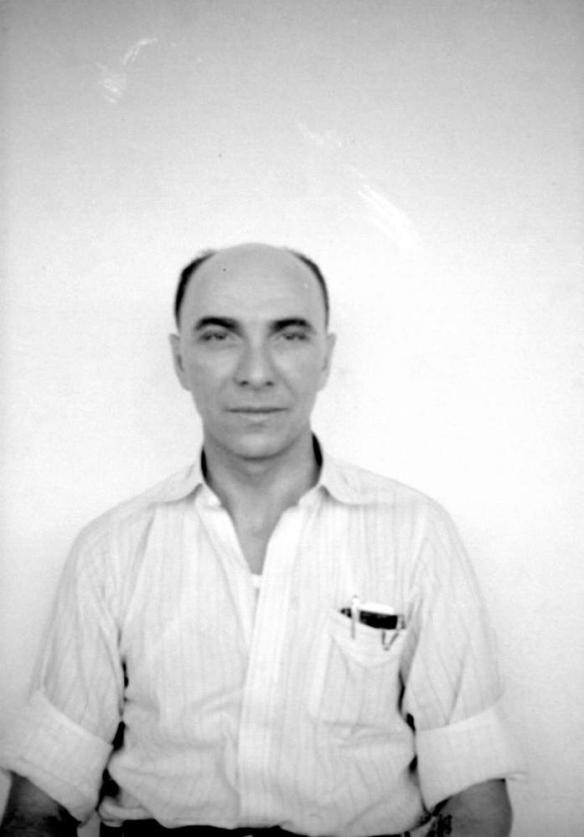 The youngest brother, George Gilbert Grey (George), was born 27 October 1909 in Wilmer.46 He worked as a guide and outfitter out of Wilmer,47 and is noted in 1946 as being “Class A” with “suitable equipment for outfitting any person desiring to hunt game.”48 George died tragically on 4 August 1948 in Invermere in a farming accident.49